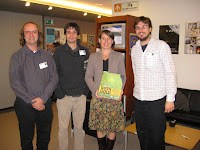 In November, the Yasuní Green Gold team kept travelling abroad and adding people and organizations to the fight for the protection of the Yasuní. So we arrived to Belgium to introduce the current situation and the activities that the campaign carries out. There we found the warm support of some other organizations also committed with this struggle, such as 11.11.11., Broederlijk Delen and VODO.
3rd November we celebrated with them and with the Mo*magazine a discussion in which the Georgina and GInes,of the Yasuní Green Gold campaign, and the Embassy of Ecuador took part. There we presented to the audience the current situation of the region of Yasuní and the strong and weak points of the official Ecuadorian Government's proposal to keep the oil underground.

The wenesday 5th Gines was invited to go to a private event of the Heinrich Boll Foundation. This event works with special rules. Only few people can assist and only by invitation. Unfourtunately, Gines cant say what happen in the event, but you can read more about that in the Heinrich Boll Foundation Website cliking here.
We also met some political representatives at the European Parliament. We discussed for a long time about the region of Yasuní and the role that European countries may play to defeat these areas of unique biological, ecological and cultural importance. In these meetings we could find people like Gabriela Cretu, vice-president of the Delegation for the relations with the countries of the Andean Community. Finally, we got the commitment of different well-known politicians, so now we keep on working to get and official answer from the European Parliament and the Ecuadorian Government.

12th November we had the opportunity to attend the presentation of the official ITT proposal that the Ecuadorian Government presented through the Ambassador Francisco Carrión at the European Parliament. During this meeting the interest of the international community to support the proposal was confirmed, but also the lack of proposal development that the Ecuadorian Government has and the necessity to improve their plans to defeat Yasuní's incredible biodiversity and its inhabitants. Francisco Carrión and his assistant Carlos Larrea stated to be working to develop mechanisms that guarantee that the exploitations of the region don't continue. They said that the Belgium ambassor will send more information... 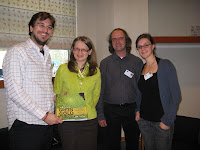