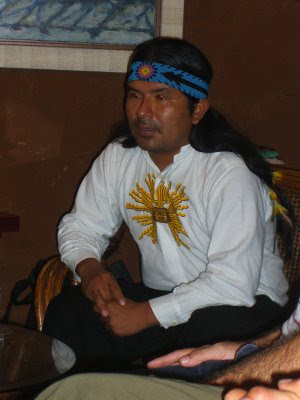 The CONAIE (The Confederation of Indigenous Nationalities of Ecuador) assembled in special meeting in the city of Tena (Ecuador) on the 30th and 31st October, 2008 has resolved:

"Point 18: To support the international campaign YASUNÍ GREEN GOLD concerning the PIVA territories or Free Comunities that forbids the oil exploitation in the ITT area."

The CONAIE represents the 14 indigenous nationalities plus 18 comunities of Ecuador.
Marlon Santi, the CONAIE's president, took part on the presentation of Yasuní Green Gold in Barcelona, Spain, celebrated on 12th October.

Also, the assembly solved important points for the preservation of the biodiversity and the exercise of the rights of the indigenous people.

You can read a summnary of the resolutions. Click here
Posted by Yasuni Green Gold at 10:45