Wednesday: a Yasuní Green Gold meeting at the House of Commons 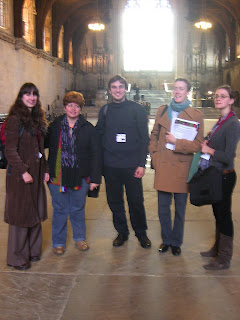 Colin Challen kindly set up a meeting for us in the House of Commons. His introduction showed a clear understanding of the concerns of the campaign and set us up well to go on and talk in more detail. Colin has also started an Early-Day-Motion (see next blog entry) a petition outlining the campaign asks for MPs to sign - So get your MP to sign!
Colin also offered to write to ministers and departments and most importantly to ask a question about the Yasuní to Gordon Brown at Prime Ministers question time!

Also excited and willing to lend a hand was Baroness Hooper who is very interested in both Ecuador and environmental issues. We were thrilled that Martin Horwood the chair of the All Party Parliamentary Group for Tribal Peoples which works alongside Survival International was also behind the campaign saying he thought it was great in bringing together all the issues and would help in whatever way he could.