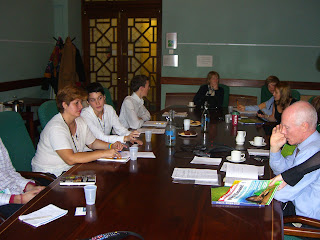 So we all piled into the meeting room at Dfid taking a pace around the huge rectangular table. We were greeted by John Hudson, Senior Forestry Adviser, Dr Amy Sullivan from the Climate and Environment Group and a representative from the Foreign Office. Anita started off by telling them all about what was happening in Orellana to her people and to the region, we were slightly taken aback (but not completely put off) when we were told that a plea for bio-diversity and indigenous people was 10 years too late, that what they were now interested in was Climate Change. Anita told them about how important these issues were to climate change but that also her people and the bio-diversity of the region had to be a priority, she was not prepared to sell them on the market.

We came to what we wanted which was for them to respond to the Ecuadorian government’s proposal officially with initial support but with the improvements laid out on our campaign page.

They said that they were unable to response as they do not believe they have been officially invited by the Ecuadorian government to participate… so our first mission on hearing such news was make sure the Ambassador be invited to present the proposal…
Posted by Yasuni Green Gold at 07:53