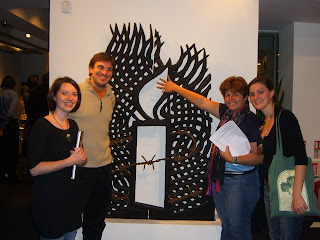 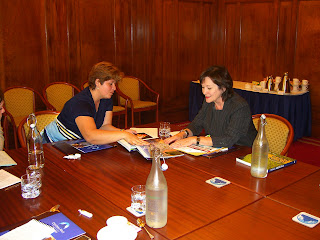 Thursday afternoon we head off once again to Westminister to meet with Joan Ruddock from the Depatment for Energy and Climate Change. She has managed to squeeze us in between the madness of the creation of this new department. We are told by her PA that she usually does not have a moment to spare but had managed to find a space for us as she was so interested in the campaign. We filled Joan in on the campaign quickly and Anita told her about how her and Lupe had lead a people´s revolution in Orellana demanding that their basic rights be met. She was very supportive of the Yasuni Green Gold Camapign, she agreed with us that the ITT proposal was important and that the British government would support it in principal. She also agreed that inorder to get the proposal through there needed to be the clarification and gaurentees the campaign asked for and that when the proposal is presented to her she would relay these points. She asked us to keep her updated on the status of the proposal and progress of the campaign. Another good result!


After this we sped off to Amnesty International. Anita was thrilled for the chance to thank in person the organisation that had played such a big part in releasing her friend and fellow activist Guadalupe Llori. They were also excitied to meet Anita and hear all about her human rights work.
Posted by Yasuni Green Gold at 00:51