A very quick summery of what went down in Spain... 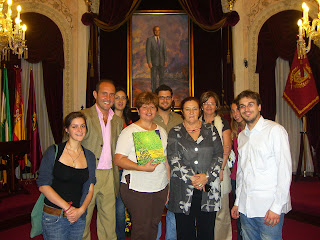 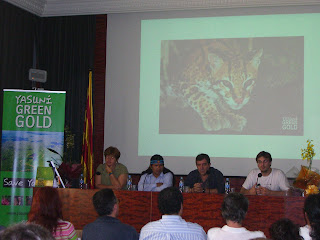 Sunday: We were in Tarragona with Ali Supay, Marlon Santi president of CONAIE and Jose Proaño Ecuadorian anthropologist and activist. We all met in Tarragona with local organisations there such as Repsol Mata, to talk about the different issues in the Yasuni and for the indigenous people of the region.

Monday: Morning we do a radio interview in Altafulle and head off to Barcelona to the office of I-With where Gines and Anita are immediately thrust onto the phone to do more interviews.

Tuesday: We have the presentation of the book in Barcelona in the UOC in the morning after yet more radio interviews. Present are various organisations with which we have been working in Barcelona such as Ideatik, Eutopia, Consultants without boarders and I-with as well as a representative from the Ecuadorian Embassy, Marlon, Jose and other groups.
From here we sped off to Girona where we had another presentation at the University of Girona where we are met by Engineers without Borders, already familiar with the situation in the Yasuni and enthusiastic to help where they can.

Wednesday: We were off bright and early to Madrid where we have a press conference at the Circulo de Bellas Artes. Again we are met by a representative of the Ecuadorian Embassy and are thrilled when El Mundo, the most read newspaper in Spain, published a huge feature length article about the Yasuni and the campaign following the meeting.

That evening we head off to Seville!


Thursday: Early that morning we are picked up and taken to Cadiz where we are bundled into the university press room to sign contracts of co-operation. We then go to the local government where we are given the grand tour… That evening we go back to the university to give another presentation of the campaign and book.


Friday: Is off to the Diputación de Cordoba, who are also very involved in the region and keen to help.
Posted by Yasuni Green Gold at 04:11